DynaRaw has been evolving over the last few weeks, and now includes a flexible curve control. By using two control points that can be dragged on a curve grid, the user can instantly see both the curve and the effect it has on the processed image. 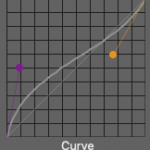 Adding contrast, recovering under-lit areas has never been easier. The two control points are placed inside the curve grid, which ensures that no clipping occurs. We believe this makes the curve control easier to use and better than curves where the user clicks the curve to add control points; clicking and dragging multiple control points on a curve allows curves that completely corrupt the image and serve very little purpose, whilst DynaRaw’s control points always maintain the set shadow point and highlight values as set with Exposure. DynaRaw 1.2.8 is available now in the Mac App Store.